An ideal for reliving: an interview with New Order’s Stephen Morris 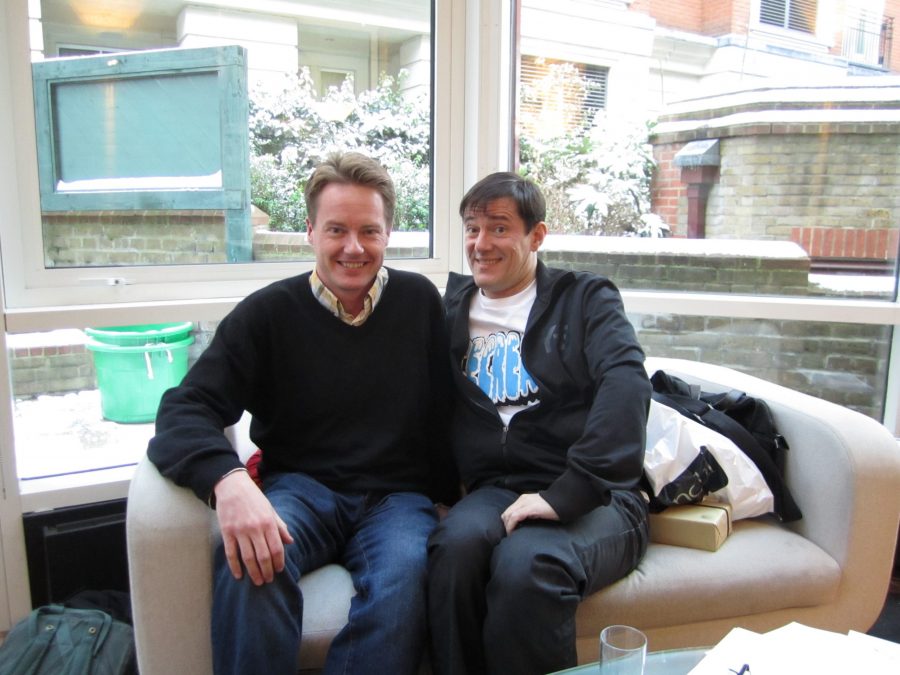 “You’ll never guess where Bernard Sumner [Morris’ bandmate] is at the moment,” says a black T-shirted music exec. “Going round the world on a yacht.” It’s in stark contrast to Morris, who is meeting GQ.com to discuss +-, a boxset of Joy Division seven-inch records he’s remastered with Frank Arkwright – a sound engineer notable for his work with Warp Records. It’s a must for serious collectors, but will Santa decipher the peculiar positive/negative symbols on Christmas lists?

That’s the elves’ problem, not yours.

GQ: How did the idea for +- come about? Wasn’t Peter Saville responsible for the name of it?
Stephen Morris: Was he? Is he taking credit for it? Indirectly it was him. In 1988, we re-released [Joy Division’s] “Atmosphere” and on the inside sleeve there’s a neon plus and minus. When it came to providing a name, that image cropped up. People wanted to actually call it Plus Minus – the words, but I said, “No, it’s not going to be that.” Saville huffed and puffed and said it looked like a religious symbol and I said, “No, Peter! No, Peter! Think of a car battery!” I don’t think he’s seen a car battery. I explained what a car battery looked like and he kind of warmed to the idea of it being a + and –.

And +- will probably sit at the top of your iTunes library.
Yes – where would it go? There’s lots of pros to it.

How do you start remastering a track?
Find it first. You basically have to go and find all the bloody tapes and listen to them all and find out which is the right one.

Do you have out-takes on these tapes?
Everything – stuff that you never even knew existed.

Is that how you were able to do the “Love Will Tear Us Apart (Pennine Version)”, which appears on +-?
The “Pennine Version” has always been there – it was on the b-side of the 12-inch when it first came out. But it wasn’t called the “Pennine Mix” or anything like that, it was just “Love Will Tear Us Apart” but a slightly different version. That version was the way we always played it live. The one that everybody knows, I actually hate.

Why, because it’s too poppy?
Just because of the bad, emotional things. Martin Hannett [Joy Division record producer] played one of his mind games when we were recording it – it sounds like he was a tyrant, but he wasn’t, he was nice. We had this one battle where it was nearly midnight and I said, “Is it all right if I go home, Martin – it’s been a long day?” And he said [whispers], “OK… you go home.” So I went back to the flat. Just got to sleep and the phone rings. “Martin wants you to come back and do the snare drum.” At four in the morning! I said, “What’s wrong with the snare drum!?” So every time I hear “Love Will Tear Us Apart”, I grit my teeth and remember myself shouting down the phone, “YOU BASTARD!” [smashes up imaginary phone.] I can feel the anger in it even now. It’s a great song and it’s great production, but I do get anguished every time I hear it.

When remastering, are you able to lift the quality of certain instruments and electronic sounds?
You EQ it, and sometimes there’s little glitches you can get rid of. One of the things I’ve found in my years doing this is the sound of vinyl changes. There are certain fads. One year they must have said, “Oh we like bright records.” Other years it’s, “We like records with lots of top on.” And then it suddenly becomes a fad that record companies don’t like records that are too bright.

So vinyl sound goes through fashion, just like clothing?
It does. It’s very, very subtle. You listen to Simon & Garfunkel on vinyl now and it sounds absolutely fantastic. The solid quality – it’s brilliant! How did they get these records to sound like that? The big thing now with iPods – I’m getting old, I can moan about this now cos I’ve got a licence to – is everything gets compressed. It’s a thing you can do with digital. If you looked at the sound pattern of an old-fashioned record it would be very spikey. But nowadays there’s no spikes – everything looks like a brick, so the quiet bits become louder. It’s actually damaging because it’s like listening to a drill. Drrrrrrrrrrr! On stuff you listen to on your iPod, it can really do your hearing in.

So is there a reason behind the release?
We’re going back to May this year – we tried to do this exhibition in Macclesfield which sort of happened, but wasn’t as big as it was supposed to be.

An exhibition?
Well, Ian [Curtis, Joy Division’s late singer] was from Macclesfield, and I got a phone call one day and they said, “We’d like to do an exhibition celebrating Ian’s life.” And it was 30 years [since his death] and it was in Macclesfield, so I said, “Yes, OK, let’s do it.” Then recession, blah-de-blah-de-blah, people losing jobs, and it happened but in a very diluted form. This is one of the things that came from it and carried on going.

The early Joy Division material is difficult to find on vinyl.
It is. I’m surprised how many people are into vinyl. For a start, my daughter, she’s like [pretends to hold 12-inch vinyl in the air], “Oh look! A record! What’s this? It’s brilliant!” And then recently she saw a cassette for the first time: “A cassette! It’s great! What do you do with it?” She sticks them on her wall, cos they’re great objects in themselves. I had to do a vinyl record not so long back. So I rang up some people who press records and they said, “Sorry, we’re full up.” “Full up?” “Yes, we’re turning people away.”

It’s more of an event buying a record.
In the Seventies, album artwork became really beautiful items. The whole process of doing an album sleeve, it became a very artistic thing. Just look at the stuff Saville did for us. He doesn’t do many album sleeves any more. Nobody does, come to that. But they’re really beautiful things and that’s something that I really miss. With CDs, the case falls to bits and the piece of paper falls out.

And people just download now.
There’s nothing to look at. But we’ve done this [Joy Division] iTunes LP.

A downloadable version of +-?
Yes, it’ll be out soon. It’s got an interview with me included, some live stuff, and one track nobody’s heard before and, call me insane, but the thing I really like about it is, you select the track and it comes up and starts spinning round on the screen. That’s brilliant! It’s like a proper record! And then it turns round. Simple things. A kid would look at it and go, “Why’s it doing that? You can’t read it.” But when you’re an old git – aaaaaah. It’s like a jukebox!

If Ian hadn’t died, how big do you think Joy Division would have become – U2-sized?
We wouldn’t have been a U2. I think U2 found a gap in the market. It’s pointless to speculate. If I’m honest, I don’t think we would have carried on anyway because of Ian’s illness [epilepsy, depression, wrong tablets to treat depression]. I think we’d have knocked the whole thing on the head.

Hooky [Joy Division and New Order bassist] was in GQ.com a few weeks ago. He was touring Joy Division’s Unknown Pleasures Down Under, with Rowetta from Happy Mondays taking Ian Curtis’ singing duties. What are you thoughts on that?
It’s funny you should mention it – I’ve been in touch with Susan Boyle’s management and she’s doing a version of “Atrocity Exhibition”.

It’s hard to imagine Rowetta singing “Dead Souls” – “Imperialistic house of prayer/Conquistadors who took their share”.
I can’t see it either.

Out of all the music equipment you’ve ever owned, is there anything that has a special place in your heart?
There’s one – and Bernard goes on at me about it. I’ve just bought it again. It’s the drum machine that we did “Blue Monday” on. The Oberheim DMX drum machine. Bernard said, “What the bloody hell did you get that for?” It’s hard to explain, but it’s just so much fun. You can’t do much with it.

Is it easy to use?
Yes! It’s difficult to explain that a machine has a human feel. You can fall on it, kick it, and it’ll still sound like Prince. You can do anything on it. It’s like a toy. I do enjoy it. It was a pain at the time, though.

Are you making music at the moment?
We’re doing another Other Two album… although it probably won’t be an album, because I don’t really want to do one. It’s probably going to be five tracks. I’m just waiting for the missus [Gillian Gilbert, New Order’s guitarist and synth player] to do some singing. I might have to sing one myself, if only as a threat to get Gillian to do some proper singing. We’ll do five tracks, then another five tracks, then another.

Are some tracks already done?
We just need the singing. I’ve done enough collaborations, and there’s nothing wrong with collaborating, but this time I just want it to be us.

Keep it in-house.
In-house, yes. I’ve got a nice house. And we’ve started doing another Bad Lieutenant album. Oh yes, and my book.

An autobiography?
Not in a way that you’d expect.

Are you writing it in the third person?
Kind of. It might actually be a novel. You’ll have to wait till it comes out.

You seem to be an habitual T-shirt wearer. Where do you source T-shirts from – the internet, or do you get them sent to you?
I go to Selfridges! Actually, this one I’ve got on says “Ice Cream” on it. It’s a Billionaire Boys Club one.

If you were forced to choose your favourite New Order track, what would it be?
Just at the minute it’s “Bizarre Love Triangle”.